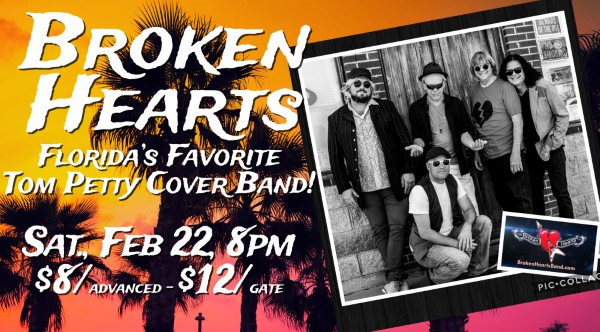 The Broken Hearts pays tribute to the music and spirit of Tom Petty (and the Heartbreakers) featuring a best-of & more catalog ranging from Petty’s early years to his latter solo albums & side projects including The Traveling Wilburys. To our knowledge, The Broken Hearts are the ONLY Tom Petty Tribute to feature direct lineage to the actual band. Broken Heart’s bass player Charlie Souza was a member of Petty’s first band Mudcrutch (later becoming The Heartbreakers) and is a co-writer of the Mudcrutch song ‘Don’t Do Me Like That’ later used by Tom Petty & The Heartbreakers. In addition the band features Robin Swenson on keyboards, formerly a member of such groups as Air Supply, Frankie Valli & The Four Seasons and 3 Dog Night. The band is rounded out by Bay area guitar guru Joe Sanders, Scott Lockhart on drums and musician/scene Shawn Scheller as Tom Petty, a Tampa area singer/songwriter most notable as lead singer/guitarist of Save The Radio, a modern rock band whose song ‘AddIt Up’ peaked at #38 on Billboard Active charts in 2014/15.